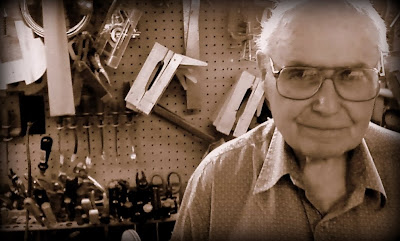 
"I know a man who makes guitars," said Julianna Craft. That is how I met Hulon Stringer. Over the next few months Mr. Stringer showed me how to build a guitar. More importantly, he showed me the crux of a true craftsman- the daily pursuit of excellence.

Having spent many years as a successful businessman, building and managing factories, Hulon wasn't sure how to spend his retirement years. Sometimes the best answers come from new questions. So, Hulon climbed into his motorhome and began to travel. He stopped in Texas. One day a neighboring camper posed a new question, one that would change Hulon's life- "Why don't you go to Bluegrass Festivals?" Thus began Hulon's season as a fiddle-maker (southern violins). He made 21 fiddles before making his first guitar. 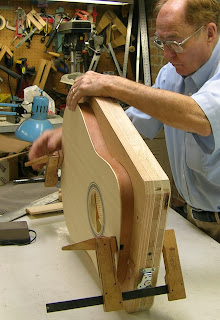 Hulon Stringer has never advertised, doesn't have a website, and to date has been commissioned to build 90 guitars... because a Stringer guitar speaks for itself. Every piece of wood that goes into a Stringer guitar is cut, sanded, and finished by the hands of Hulon Stringer. His prices? Beyond reasonable. I once commented on the price a friend paid for a 'famous' brand guitar and Mr. Stringer said, "The price doesn't make it a good guitar. The real question is 'How does it sound?' Every guitar I have made sounds good." I can testify to that. There are four Stringer guitars in the Carter family: mine, my son Samuel's, and two commissioned by my Dad. My Stringer guitar is #57.

As we say in the South, 'Hulon Stringer is honest as the day is long.' While working on my guitar, I asked him, "What do you think about me going into the guitar-making business?" Without looking up, he asked, "Do you like to eat?"


Some truth is hard to swallow after you've chewed on it awhile.


Recently I visited Mr. Stringer. Still working daily, he showed me a new jig he devised for shaping the neck's dovetail, and, a couple of guitars he was working on. On September 11, Hulon turned 91.


He told me he wants to make one more fiddle. 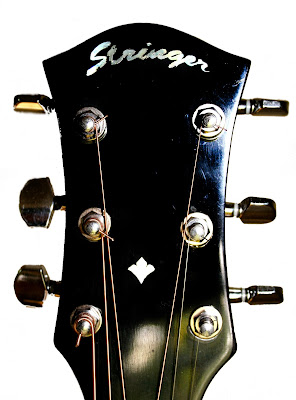 And now, you can hear Hulon Stringer's story
as only he can tell it.


Hulon Stringer In His Own Words from Good Day on Vimeo.
Posted by Unknown at 1:01 PM